A new update for Prismatic Maze is available.

Meanwhile, we're working towards an iOS release for the game.

Some time ago, we added empty spaces to maps - something like dropping some sand into your petri dish.

Pigments decided to celebrate this with decorations for Christmas, and after the holidays some seeds were left over.
This caused trees to spring up in their places. 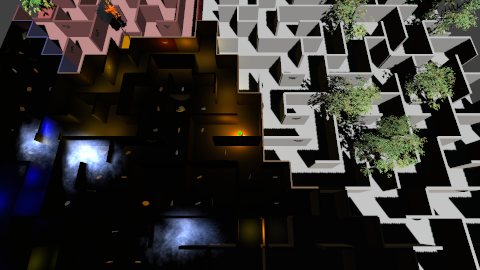 It seems that the Pigments affect what types of trees grow in these areas now.
Primary colors seem to be pretty normal deciduous & conifer trees but Orange and Purple are a little bit stranger and Black seems to kill its trees outright.

The trees came with a full rework of the rendering pipeline...
This change affects colors, lighting and shadow effects throughout.
Most of these changes should be pretty small, but it touches almost everything.

We switched our updating scheme from date-based to Semantic Versioning & exposed the version number on the main menu.
The new versioning scheme conveys a bit more information than the date did since the it is easily comparable and contains info for major, minor and path versions.

We also fixed some bugs ;)

We're also working on a Campaign Mode that should improve game progression.
Look forward to seeing more of that in the near future :D